Hands down, the AR-pattern carbine is perceived as the standard… 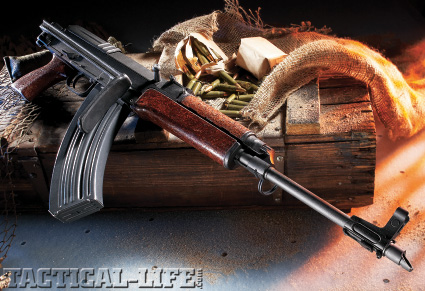 Hands down, the AR-pattern carbine is perceived as the standard today when it comes to military-inspired law enforcement patrol carbines. However, there are some unique alternatives to the ubiquitous AR on the market today available from the former Soviet Bloc. 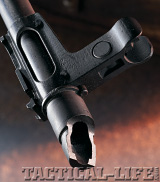 In fact, due to the drawing back of the Iron Curtain and the resulting collapse of the Soviet Union, US law enforcement officers now have access to a whole host of handy carbines chambered for the capable 7.62x39mm cartridge. One shining example of this is the Century International Arms VZ2008 carbine, a

US-legal variant of the Czech Vz. 58 rifle. The story of this handy little carbine based upon a Cold War-era rifle design is a rather interesting one.

With experiences gained in the bloody combat of World War II, the post-war Soviet Union saw a need for a new breed of high-capacity, select-fire rifles for their combined militaries. In fact, this desire on the Soviets’ part coincided with a new movement in firearm design driven by the earlier introduction of the German StG44 in 7.92x33mm — the word’s first practical fielded “assault rifle.”

The new “assault rifle” was clearly the way of the future. Bridging the gap between full-power rifles and high-volume-fire submachine guns, the assault rifle employed what would become known as an intermediate cartridge, a cartridge shorter and less powerful than a traditional rifle cartridge, but more powerful than a pistol cartridge. The result was a rifle that sported the close-range volume of fire of a submachine gun, while still retaining the ability to decisively hit out to several hundred yards.

This movement would ultimately become the predominant model of military rifle design for the next six decades with intermediate-cartridge-based assault rifles such as the M16 in 5.56x45mm becoming the standard for not only the militaries of the West but also for many of its law enforcement groups. However, it was not the only choice.

In the immediate post-war era, the Soviet Union set about a program of assault rifle development, resulting in the 7.62x39mm cartridge, first chambered in the SKS rifle. The cartridge proved to be quite capable, propelling a roughly 125-grain projectile at around 2300 fps (feet per second). However, the 10-round, fixed-magazine SKS did not fully fulfill the intended role of a true assault rifle.

Shortly thereafter, Mikhail Kalashnikov developed what would become one of the most influential assault rifle designs in history, known collectively as the AK-47. Sporting a detachable 30-round magazine, handy size, 7.62x39mm chambering and hardy reliability, the new AK solidly fulfilled this new role.

At the same time, the Soviet Union’s allied satellite states were also developing their own new assault rifle platforms. In most cases, as with nations such as Poland, Romania and Bulgaria, these states developed rifle variants quite similar to the parent Soviet AK-47 design. One glaring exception, though, was Czechoslovakia. And this should come as no surprise considering the fiercely independent nature of the people of that nation, as well as its well established and highly respected armsmaking tradition.

The Czechoslovakian design, dubbed the Vz.58 and adopted by that nation’s military in 1958, easily fulfilled the role of a true assault rifle, offering select-fire capability in a compact yet manageable package. However, it differed drastically from the Soviet AK in its design, its manufactured and—much to the dismay of Moscow—initially even it’s chambering.

In fact, the Vz. 58 as it was first developed was actually chambered for the German 7.92x33mm chambering of the StG44. However, after some decidedly intense pressure from the Soviet Union, the assault rifle was redesigned to chamber the standardized Soviet 7.62x39mm cartridge.

Different Designs
So exactly how did the Vz. 58 differ from a more traditional Kalashnikov design? At first glance, the Vz. 58 appears to be a basic Kalashnikov pattern rifle. However, a closer look reveals some distinct differences.

Whereas the first AK-pattern rifles and the later AKM variants sported stamped steel receivers to keep down both weight and costs, the Vz. 58 rifle featured a milled steel receiver. However, despite this fact, the svelte and handy Vz. 58 actually weighs roughly a pound less than a comparable Kalashnikov. In addition to being lighter, the Vz. 58 is also smaller and more compact than a Kalashnikov while still chambering the same powerful 7.62x39mm cartridge.

The rifles are also mechanically different. While the heart of the Kalashnikov’s rugged gas system is a substantial gas piston rod attached directly to a heavy bolt carrier assembly, the Vz. 58 sports a short-stroke piston system. Rather than a large, one-piece piston/carrier system like the AK, the Vz. 58 has a separate piston rod located in the gas tube above the 16-inch barrel.

As gas is tapped off the bore, the short-stroke piston is driven rearward a short distance to impact the front face of the rifle’s bolt carrier. This impact causes the carrier to move rearward to cycle the action. An interesting side effect of the design is the fact that the piston rod can easily be removed from the rifle for cleaning without having to disassemble the action of the Vz. 58 as you would on a Kalashnikov.

Internally, the Vz. 58 is also distinct from the Kalashnikov. While the AK employs a traditional rotating bolt locking system, the Vz. 58 sports a tilting locking piece in its bolt carrier assembly that locks directly into the rifle’s stressed-steel receiver. And the firing mechanism is even more radical, featuring a striker rather than a more common hammer. As the action is cycled, the rear of the striker is held by the sear. When the trigger is pulled, the disconnector is activated and the sear is allowed to release the striker to move forward under spring pressure to strike the base of the firing pin.

Similarities
Operationally, the Vz. 58 is vey similar to a Kalashnikov, a quality no doubt appreciated by decision makers in Moscow who were likely agitated by the independent streak of the Czechoslovakian armsmakers.

As with the AK, simplicity is the key with the Vz. 58. To load the rifle, one rocks in the magazine from front rear until it engages the paddle-style magazine catch located at the rear of the magazine well. Once this is done, the user charges the action by retracting the reciprocating charging handle on the bolt carrier and releasing it to strip a round off the magazine.

The safety of the Vz. 58 deserves mention. As compared to the large and arguably clunky dustcover safety of the AK, the Vz. 58 sports a rotating lever thumb safety above the pistol grip. Other areas of note include the fact that the rifle features a last shot hold-open device actuated by an empty magazine. And the magazine itself is unique, being made from aluminum rather than steel (as with AK magazines).

Sights of the Vz. 58 would be familiar to anyone acquainted with a Kalashnikov, being made up of a sliding tangent rear assembly forward of the receiver. The front sight is a sturdy winged post assembly. Unlike latter day AKM-style Kalashnikov variants, the Vz. 58 has no means for conveniently attaching an optic.

The Vz. 58 was produced in two primary variants: a fixed stock standard model and a compact variant sporting a steel side-folding stock. The stock set material of the Vz. 58 is a unique wood-impregnated plastic material that was likely quite advanced in its day.

VZ2008 Details
Thanks to the efforts of Century International Arms, a US-legal variant of this fine design is now available on these shores. Dubbed the VZ2008, this carbine sports the side-folding steel stock and features a combination of original Czech and new US-made parts for legality.

The test sample I received from Century sported an evenly applied gray parkerized finish, and all controls operated smoothly. I noted that the threaded muzzle of the VZ2008 was topped off with a standard AK-style slant brake.

First picking up the VZ2008, I was struck by the light and compact handling characteristics of the carbine. With the stock folded, the 7-pound VZ2008 measures just over 26 inches long. This compact size, combined with the powerful 7.62x39mm chambering and 30 + 1 capacity makes it extremely well suited as a law enforcement patrol rifle.

The VZ2008 in quick order proved to be a quick-handling and fast-pointing little rifle. The folding stock was easy to operate by simply pushing up on a button at the base of the folding hinge mechanism. It locks solidly in both the open and closed position. In addition, despite its Spartan appearance, the steel stock proved to be surprisingly comfortable against my face.

Shooting Impressions
Once I had disassembled the rifle, inspected and oiled it, I reassembled it and headed out to the range with a selection of Wolf, Remington and American Eagle ammunition. Once I was set up on my Coyote Jake’s Bench with my Caldwell ZeroMax rifle rest, I started putting the VZ2008 through its paces.

Over the course of a few hundred rounds, the rifle performed without a hitch. Despite its light weight and compact dimensions, the perceived recoil of the 7.62x39mm carbine proved to be quite pleasant and manageable. Accuracy at 100 yards was also quite good; particularly considering the fact the rifle was tested with only the iron sights.

Although the AR may be the dominant military-inspired LE patrol carbine in this country, the Czech-inspired VZ2008 offers LE officers an extremely appealing alternative. Combining the added punch of the 7.62x39mm cartridge in a compact, handy and ultra-reliable package, the VZ2008 can easily fit the role of the ideal patrol carbine. Find out more at Century International Arms’ website: centuryarms.com or call 800-527-1252.

Hands down, the AR-pattern carbine is perceived as the standard today when it comes…

How To Paracord Wrap A Folding Stock

Century Arms C39V2 How S It Holding Up

How To Load A Vz2008 With An Sks Stripper Clip

Filv X Scott Rill Give Me

Fukase Cause I M A Liar

Good To Be King Meme

Cam Cole So So Wrong The Main Stage Camden

How To Paracord Wrap A Folding Stock

Century Arms C39V2 How S It Holding Up

How To Load A Vz2008 With An Sks Stripper Clip

Hai Cu Mine In Dubai

Filv X Scott Rill Give Me 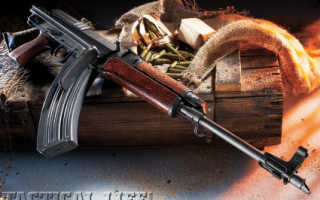 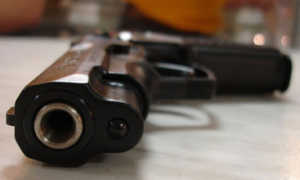 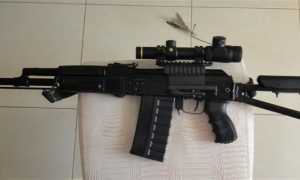